We have a x64 version almost ready to be released. There's one known bug that holds us back: occasionally, the reading of stylus tilt angle is wrongly rotated 90 degrees.
If that doesn't border you much, you can test drive the x64 version downloadable from here:

It is treated as a separate app from the x32 version, so that both versions can co-exist on the same computer. If you've bought the x32 version from Gumroad, you just need to register again using the same Key for the x64 version.

The main (probably the only) advantage of the x64 version is that you can now import overlay or Background images or export snapshot in large size without seeing 'out of memory' error. Previously, if you do encounter such error, you need to close other apps to free up RAM, and restart Expresii so that you can load/save very large files.

Hope this makes things clear. Let us know what you think about the new 64-bit version.

Amazing! Woah this definitely feels snappier and more robust than the 32 bit version, IMO. I didn't even feel the bug you mentioned. And now I can export to gigantic sizes with no errors, which is amazing. Before anything larger than 6k would just not work. Now first try 10k export to PSD and it just worked. One suggestion: can you add a "No Layers" option to the PSD export option? I would like to create files that dont come in 3 layers, just a "flat" file (like Flatten option in Photoshop). Instead of creating 500mb files it could create 150 mb files... 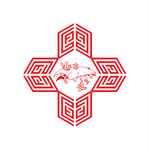 Thanks for your feedback!

For a flattened output, you can always choose PNG instead of PSD on the right side of the Snapshot dialog, or even just change the file name extension when you're asked for a filename.

The PNG compression should give you a better ratio than a flattened PSD too.

The quality of the PNG would be inferior to PSD (compression?) Or am I mistaken about the capabilities of PNG files...

FJGC wrote:The quality of the PNG would be inferior to PSD (compression?) Or am I mistaken about the capabilities of PNG files...

Great! Thanks for the information.

FYI, Expresii uses an external tool called ImageMagick (www.imagemagick.org) to product the PSD file and their compression level is not the best - if you import the output PSD into other software and then save it as a new PSD, the new PSD would be smaller. The PSD format also requires an extra (hidden) image of all the layers combined inserted into the PSD file, so the PSD is bound to be bigger than necessary.

Thanks for keeping Expresii regularly updated. What are the changes in latest version?  I have noticed on my Surface Studio that text layout has changed.  Text now too small and columns/rows sometimes overlap (see attached).

I think you forgot your attachment? But I think I know what your situation is.

I have been working on high-DPI support and I believe it was due to me setting the high-DPI support flag in the EXE that messed it up on your system. On my system, I have the installed Expresii to use "System Enhanced" for high DPI override so I didn't notice anything wrong when I package the last update.

Until my next update, please also use "system enhanced" for the time being so that you get readable UI: 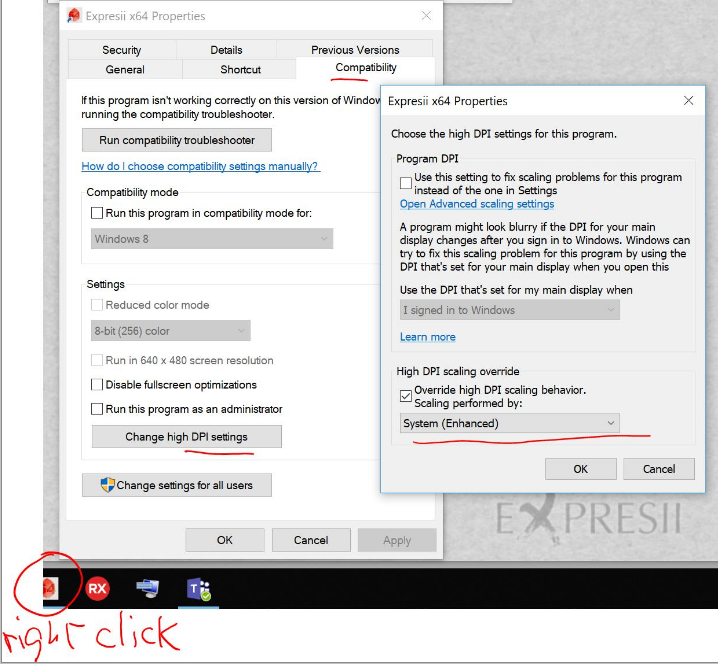 Sorry for the hassle.

That worked.  Thanks.  Not sure what happened to the attachment! Never mind.  Is there info about changes in the update?

Yup, when you update, there's a "what's new" link (appears when you mouse-over the update version link in the Welcome screen, or if you update via the Update button in the Settings Window, you get a 'what's new' link in the dialog too):
http://www.expresii.com/update-log.html

After switching, it was normal at first, and after about 10 seconds, the lines became very thin.

switch back to wintab OK.

If you're using e.g. a wacom (and any stylus vendor who would provide their own wintab32.dll) stylus, please don't switch to Windows Ink in Expresii. I found, for some reason, using Windows' own API for getting stylus data doesn't always work for those vendors.

On a Surface Pro, where they don't provide their own wintab32.dll, we then need to switch to use Windows Ink, and the diagnostic works: 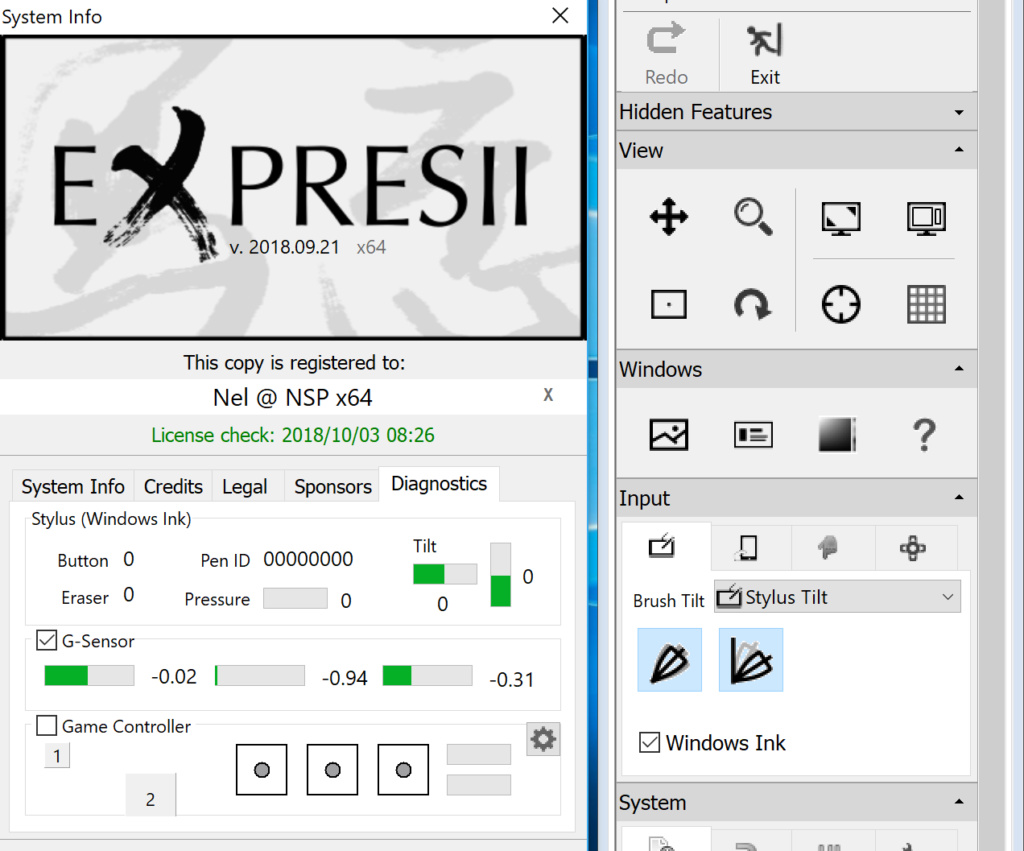 If switching to 'Windows Ink' in Expresii doesn't work for you for x64 version, the x32 version should be the same. I believe it's not because of the difference of x64/x32 version, but just because something external to Expresii.

What is the relationship between these three windows ink?

oops... just saw you have an attached image. You're right the checkboxes of 'Windows Ink' is not synchronized inside Expresii - and this a bug. I'll fix it in the next release. Thanks!

To answer your question, frankly, I can't be sure what it does for Wacom's own checkbox. I believe checking it means they will channel their stylus data to Windows's stylus API, but in fact, there're several Windows API's for getting stylus data - so it could be that they missed the one we use. The line becomes very thin in your case means the stylus pressure data we get from the Windows API is very small - a wrong value.

For those two checkboxes in Expresii, they are the same thing. I added one right in the right side of your screenshot just for the convenience to the user. Checking 'windows ink' checkbox in Expresii means we switch to use Windows' API instead of wintab32.dll provided by stylus vendors.

.... and here is the attachment I hope! Just realised .xaw files not included in attach list so I have zipped it. ( Still not attaching - what am I doing wrong? Oh it is saying not enough storage space - it is 3Mb) Anyway it should be obvious what I am saying without the file.

CaliforniaBlue wrote:I am finding there is still some incorrect behaviour in snapping layers.  I attach a file to show what I mean.  If you choose 'snap all layers'  it works just fine.  If you choose snap one layer, the bottom layer snaps to background but stays also as a layer so it is in fact doubled up. I guess this could be deleted.  However the middle layer also snaps to background at the same time and the top layer shunts down to take its place.  Snap again and the same thing happens so I think the problem is around the bottom layer snapping but staying where it is and the middle layer snapping at the same time and being replaced by top layer.  I guess in fact the middle layer is acting like the bottom layer if you see what I mean.

I'll look into that. Thanks for your patience.

Thank you so much.  Works well.  I snapped down six layers in succession and exported.  All was fine.  Now we have (almost) as many layers as we want - a huge improvement.

There is just one small point which is that you can't actually see the snapped down layers in the background box.  Obviously they are there because you see them on the screen, they save and you can retrieve them by 'undo'.   It is only cosmetic so something for next update?

Well next time I opened you could see the snapped layer so it must just have been a glitch the first time. Thus all is great.

Glad that the layers work for you. Yup, combining SnapDown and saving multiple Artwork files, you can virtually have unlimited number of layers.

Yeah, we're aware of disappearing UI for Overlay and Underlay. It seems to be a bug in the UI framework we use. Will investigate and try to fix it. Thanks for your patience again.