My surface book 2 doesn't work with Expresii.
This is my second on, Microsoft sent me a replacement and it's still performing terribly with it.
It wouldn't use the Nvidia card without me instructing the GeForce Experience to use it with Expresii.
But even with the 1060 engaged the performance is terrible.
It's running around 50fps
It can't draw a flowing line, it's always faceted. And after a minute or so, it gets really sticky and starts not following the liine of the pen, but creating straight lines.
Both of them have done this.
I'm guessing this is a Microsoft problem.
Anyone got any workarounds??

In another thread, a user says using finger to paint get much better performance on the Surface Go:
https://expresii.forumotion.net/t248-best-settings-for-surface-go-8-gb-ram-128-gb-sd

Since I still don't have a Surface Book 2 to test yet, can you please try to see if finger painting (see a screenshot in that thread to see how to enable Finger to Paint) makes a difference on your machine?

If I switch the finger control to paint the cursor follows my finger well, and changes size depending on the angle of my finger, but no ink comes out...

hm... so it looks like it's not the 'Windows Ink' part that is causing performance issue on your SB2 like in Surface Go's case of the other user.

For your information, I get good enough performance on my Surface Pro 2017 i7. 'Good enough' because it's only an integrated GPU. I have been suspecting it's some Windows Update that might be the culprit, since the 1060 is a very capable discrete GPU and I was able to run Expresii fast on the Surface Book 2 13" with the 1050 GPU about half a year ago.

And yes, by design, Nvidia Optimus would by default use the integrated GPU in order to save power, so users have to manually do the specification.

One way to verify if it's recent changes in Expresii cause such a bad performance hit is to install older versions of Expresii archived at  http://expresii.atspace.cc/files/rdtr/

I was using some versions of Expresii around May 2018 on a Surface Book 2 13", and was able to get such a very usable performance (around 150 FPS):
https://www.youtube.com/watch?v=0c0Ca-pZgUc

If you find those version from May 2018 still give non-usable performance, it's more likely it's some changes in Windows itself that causes the trouble.

FYI, you don't need to uninstall Expresii first in order to install another version of it. Just run the Update installer. Those 'Update' files in the archive are just "Setup" files without external dll's that don't need to be updated.

P.S. Sorry to say I still don't have a SB2 to test yet. Things are going slow around here during the Lunar New Year period.

Some update: I did some research on this matter and found that nvidia GPU disappearing a common issue for SB2:
https://www.reddit.com/r/Surface/comments/8il9k8/gaming_problem_with_brand_new_surfacebook_2/
https://www.reddit.com/r/Surface/comments/8p3uum/surfacebook_2_nvidia_card_randomly_doesnt_work/
https://answers.microsoft.com/en-us/surface/forum/all/surface-book-2-graphics-card-issue-nvidia-problems/660aaa8d-bb20-44f3-981a-a1194c83d1c2

Now, if you're not one of those victims with missing nvidia GPU causing apps to run slow: I got hold of a SB2 15.5" with 1060 GPU, 6GB VRAM to test with. I found that using the default app window size, it performs reasonably okay at around 130 FPS (although I expect a 1060 to give > 150 FPS. hm... maybe because the Windows Power Option was not set to Best Performance). If I resize the app window larger, it starts to perform badly, like what you have reported.

This looks like GPU memory being not enough for the larger window rendering. The slow down memory swapping can cause is just about what we have observed. But how come? It has 6GB of dedicated RAM, which is a lot. Expresii does query the amount of free GPU RAM for nvidia GPU (it displays amount of free VRAM in App Menu>System>Undo tab) and will lower the undo level if it finds free RAM too little. FYI, I found that GPU driver could replenish (should be via memory swapping transparent to the app) the amount of free memory reported to an app when it keeps asking for more. On my desktop system with 1060, similar slow down is observed if I intentionally use a lot of undo buffer (you can set the undo level higher, and keep stroking to fill the undo buffer).

I'd do more investigation.    Meanwhile, you can try having the main window of Expresii smaller or lowering the undo level and see if it helps with the performance on your system.

Same as your problem with my SB 2n15 inch

Similar issues here. I have an SB2 15 with the 1060. If I keep the canavas zoomed out then performance is relatively slick but if I zoom in then I get very sluggish / chugging FPS. I'm forcing the program to use the dedicated graphics, btw.

FYI, I had an SB 1 with Performance Base last year and Expresii worked very smoothly on it..

Thanks for your info. Good to know SB 1 with nvidia GPU is working well with Expresii.

I just fixed the performance issue shown on the Surface Go (see https://expresii.forumotion.net/t248-best-settings-for-surface-go-8-gb-ram-128-gb-sd#1366)
and it's possible the fix also fixes the issue on Surface Book 2. Appreciate it if you can verify that if you have the SB2. Thanks!

Great, thanks SMagliocco for your confirmation! If no more complaints from other users for a while, then I will mark this issue resolved.

But I tried to confirm this by going to a store. I got only 80 FPS with default window size, and 60 FPS if in fullscreen:


Could SMagliocco let us know how many FPS you get?

Will update Windows 10 to later versions and see if that makes any difference. Stay tuned.

I installed all the Windows Updates (now at win10 1809 OS build 17763.379) and found nothing giving negative effect on the performance of Expresii as far as Window's own update goes. However, if I install the latest nvidia driver 419.35, I found that the nvidia GPU is only ~50% utilized, making the Expresii's performance dropping to 60 FPS.  I did set the Power Mode to 'Best Performance' and it's the same.  Reverting to driver to 391.35 gets me back the best performance of 100+ FPS at Fullscreen: 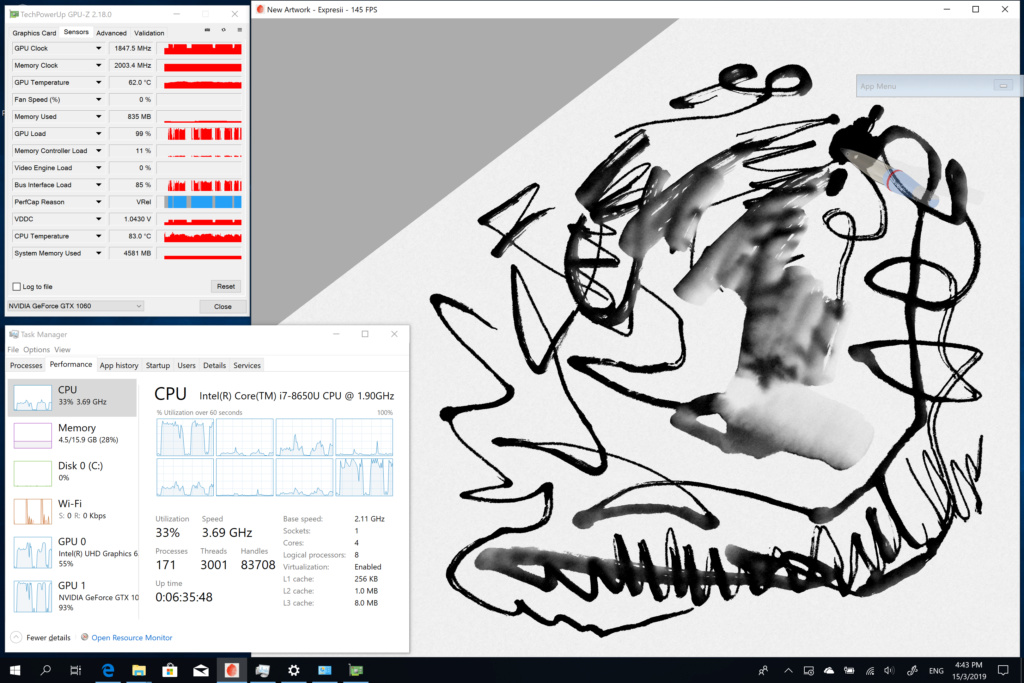 So, it looks like nvidia driver does impact the performance.  I looked for options in the nvidia driver and also GeForce Experience (with Battery Boost, Whisper Mode) and tried to opt for getting the best performance but all these don't make a difference.

Is it nvidia's fault? Not sure. Maybe it's Microsoft asked for such performance capping on the SB2 15" so as to fix the battery drain issue and only the new nvidia driver allows that. See:
https://www.extremetech.com/computing/259359-microsofts-surface-book-drains-battery-gaming-even-plugged 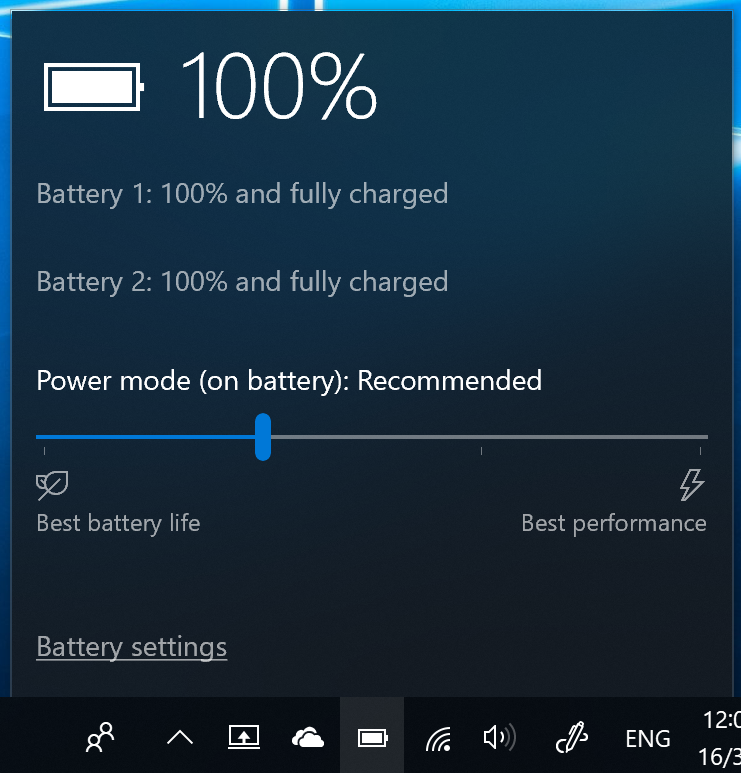 So it looks like MS (and/or nvidia) has make an implicit power capping. 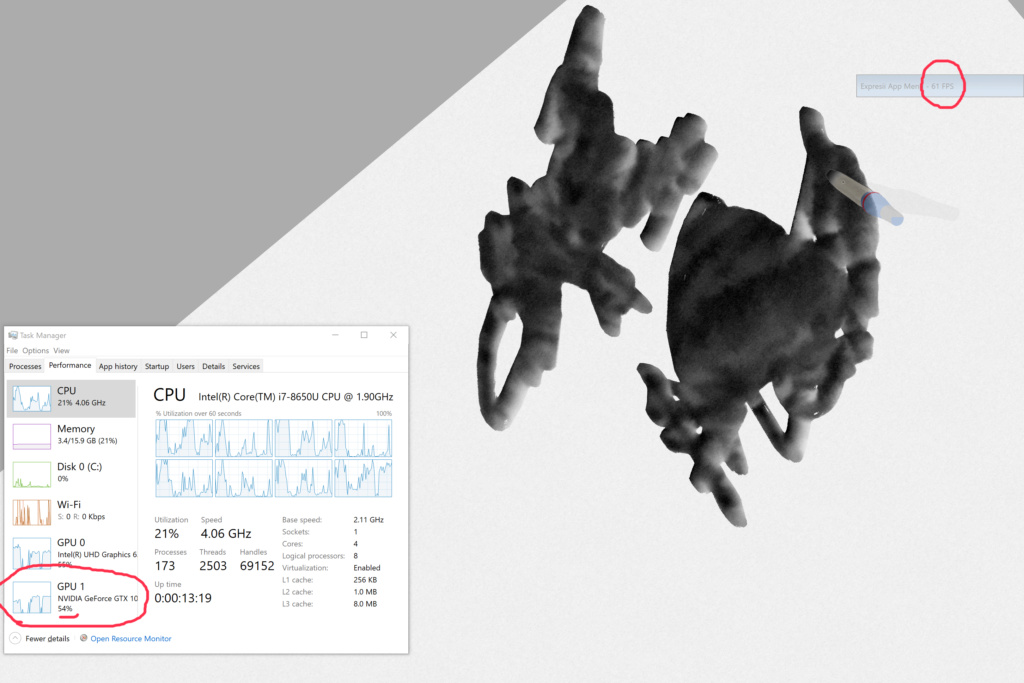 In conclusion, I am able to get the proper performance on the SB 2 with 1060 GPU. Let me know if it helps after installing nvidia driver 391.35 on your machine: (https://www.nvidia.com/download/driverResults.aspx/132845/en-us)

I've sent a report to Nvidia via this page https://surveys.nvidia.com/index.jsp?pi=6e7ea6bb4a02641fa8f07694a40f8ac6
hopefully they will look at the issue.

No response from nvidia on the driver feedback yet.

So, we also posted about the situation here:
https://forums.geforce.com/default/topic/1105355/creative-apps/capped-gpu-utilization-on-surface-book-2-15-quot-gtx-1060-for-creative-app/

Still waiting for nvidia to response.

I have already tried to force NV card on the Nvidia control panel for Expresii. But when I get Expresii running, there is no sign that the NV card is working, and the FPS is only 45-65.
FYI, my Expresii is purchased from windows store, it's a store version.

The exe of Expresii Store version location is not easily found, but you can add it to the nvidia setting using the Recent app list: 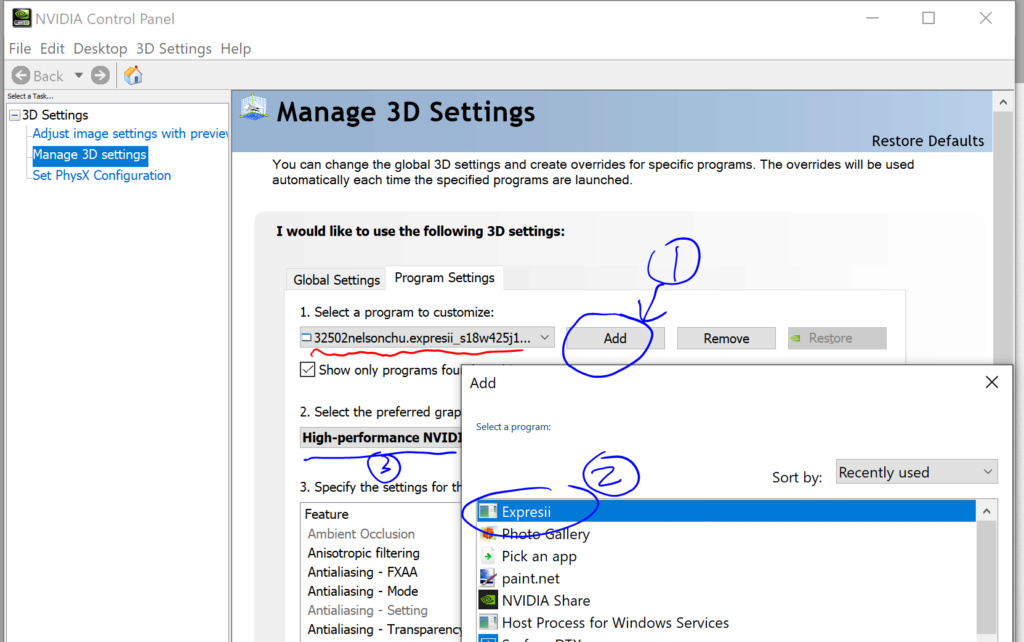 The Store version of Expresii is displayed as "32502nelsonchu.expresii....".

Let me know if you still can't specify to use nvidia GPU correctly.

OK, I know why it's nor working. I have set the x.exe file as the execution file..... 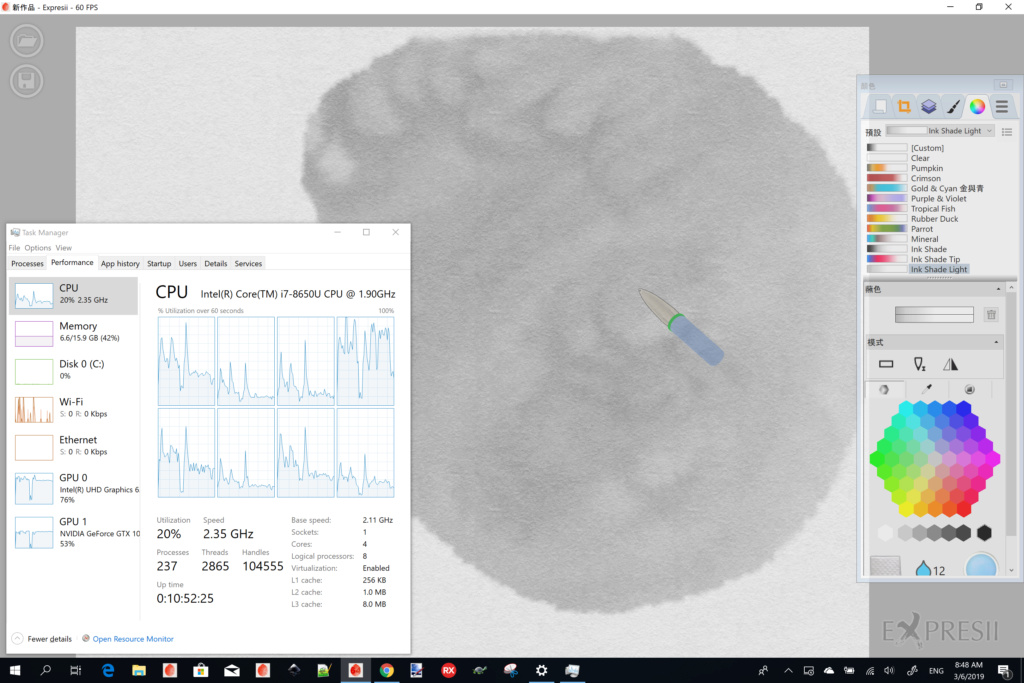 Looks like Microsoft is trying to lower the power consumption of SB2 to avoid power drain or something. 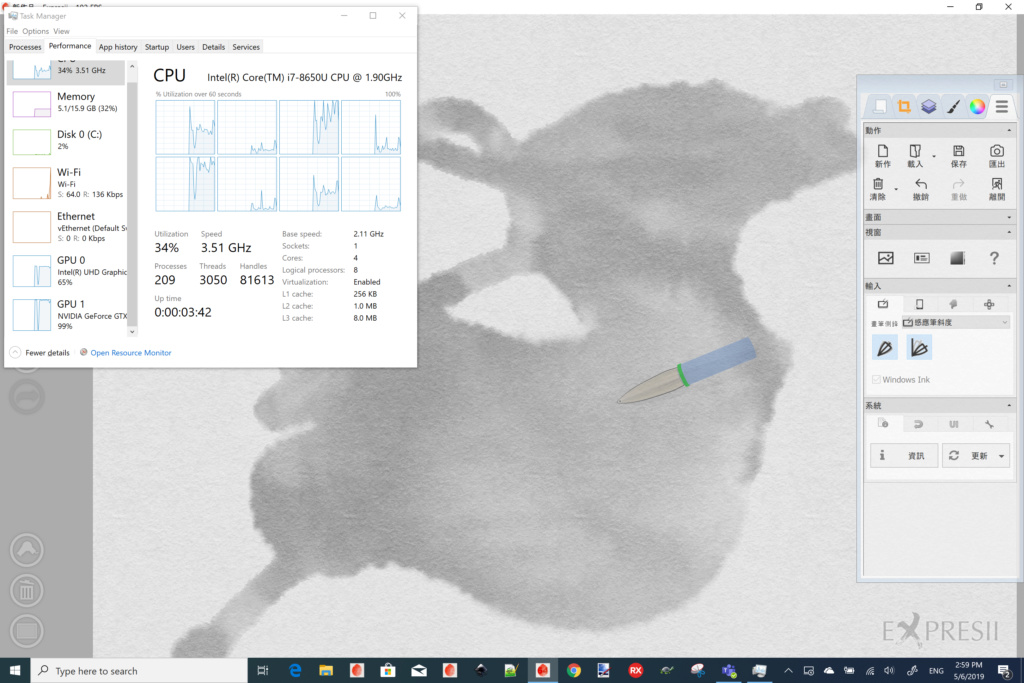